Gero-Punk Poem: Breathing and Being

Play and collaboration and spontaneity and complexity and creativity and rebellion are at the heart of the Gero-Punk Project.

At the most recent Gero-Punk Salon we engaged in a communal writing project, a version of what the Surrealist André Breton called the “Exquisite Corpse,” a collaborative creative process that taps into the collective unconscious. In our version of the process, we wrote eight line poems, with each of us writing a line on a sheet of paper and then folding the paper so the next writer could only see the line immediately preceding.  The poems emerged through each writer’s response to the line before, without knowing anything about the shape of the overall piece.  We were all working within the broad themes articulated in the Gero-Punk Manifesto, but each with our own ideas about what those themes might entail.

Over the next several days I will be publishing the eight Gero-Punk Poems that emerged from our creative play together. 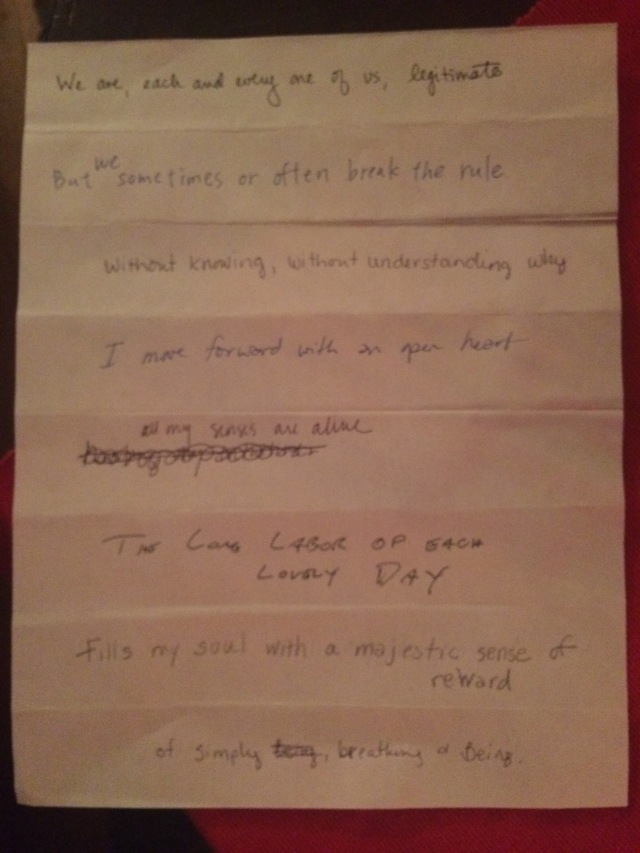 We are, each and every one of us, legitimate

but we sometimes or often break the rule

without knowing, without understanding why.

I move forward with an open heart

all my senses are alive.

The long labor of each lovely day

fills my soul with a majestic sense of reward

of simply breathing and being.