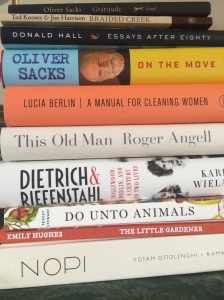 Who was it who told me — decades ago, now — that to become a better writer, one should read widely and well? I wish I remembered who it was because if I remembered, I would thank them for their advice, advice I have passed down to many generations of my own students over the years, especially when I’d hear them say that they didn’t have time for “pleasure reading” because they had to focus on their school-work.

One must always take time for pleasure, in books and otherwise, I would tell them.

Speaking of pleasure, I received quite a varied collection of books as gifts during the winter holidays. I’m grateful to have thoughtful people in my life who not only know I’m a serious and wide-ranging reader, but who know me well enough to know the kinds of books that will capture my attention. But of all the times for me to pull in such a delicious haul of books, this ain’t it, because there’s this book that I’m in the process of writing (co-authored with Harry Rick Moody), and the last thing on earth I need right now is the distraction of reading anything but what is absolutely necessary as fodder for my own writing.

But far be it for me to be a person who just says a bunch of stuff she doesn’t actually practice!

I will confess to having read through Ottolenghi’s latest cookbook, Nopi, a gift from my daughter Isobel, at least twice, because it focuses on beautiful food and, hey, a girl’s gotta eat, right? Not that I’ve actually made any of the recipes yet—I’m still in the fantasy stage with Ottolenghi, imagining what it will be like the first time. If you aren’t familiar with the Israeli chef Yotam Ottolenghi, I would urge you to check him out – start with his first book Plenty.

I also read – in one sitting, on January 2nd when I was still technically on winter break – a short book of poetry, Braided creek. My friend David sent it to me for my birthday. Actually, it would be more precise to call it a poetic dialogue between two poets, Ted Kooser and Jim Harrison, who are also dear longtime friends. Here’s one of their little bits I quite like:

“Do you feel your age?” she asked,

so I squeezed my age till it hurt,

then set it free.

Braided creek would be great to read alongside Essays after eighty, by Donald Hall (though I’m cheating because I received that from Simeon the birthday before last). In the first essay in the collection, “Out the window,” Hall writes,

After a life of loving the old, by natural law I turned old myself. Decades followed each other – thirty was terrifying, forty I never noticed because I was drunk, fifty was best with a total change of life, sixty began to extend the bliss of fifty – and then came my cancers, Jane’s death, and over the years I traveled to another universe. However alert we are, however much we think we know what will happen, antiquity remains an unknown, unanticipated galaxy. (p. 7)

Hall goes on to share with the reader the ways in which others remind the old, lest they forget, that they are “extraterrestrial,” that is, alien and “a separate form of life.” This is hard news for me to hear, I don’t want it to be true. But Hall speaks with the authority of his own lived experience. And so.

Speaking of the incontrovertible authority of lived experience, I’d invite you to explore the final essays by Oliver Sacks, Gratitude. Erica gave me this little book (and I gave a copy to my mother), along with Sacks’s memoir, On the move, which I just started reading this week; so far, so good!

Collected in Gratitude are four essays, written between 2013 and 2015. The first essay, “Mercury,” Sacks wrote on the occasion of his 80th birthday. The other three essays were written after Sacks discovered that his cancer, which had been in remission for a decade, had returned and was killing him. I had read three of the four essays in The New York Times, where they were originally published in close proximity to when Sacks wrote them. Reading them as standalone essays in the Sunday NYT was a blessed, revelatory experience. Sacks writes about the past, the passions and preoccupations of his youth that have shaped him and stayed with him. But these essays serve not only as bits of memoir, but as a testament to what one might discover by bravely being present to one’s own demise. Sacks’s words directly transmit a kind of embodied, worldly wisdom, they portray a way of living a life that is noble and fresh in all of its complexity, especially at its inevitable end.

Sacks’s final few months on earth coincided with the months this past fall when I was facilitating statewide conversations for the Oregon Humanities Talking About Dying program. The generosity with which Sacks shared with his many readers his lived experience of dying, the grace and gratitude with which he greeted his own end, emboldened me as I tried to foster conversations with strangers about their own ends.

Returning to these essays after having had the experience of facilitating Talking About Dying, and in such close proximity to Sacks’s death, and reading them all together, one after another, was a strange and staggering experience. The essays were familiar to me because I already knew them in their singular forms; but side-by-side, their impact was to leave me dizzy and warm and teary. When I finished, I put my hands on my face, covering my eyes, and I shook my head and said, “Oh! He was just such a generous, brilliant human!” Only later did I suggest to Simeon that he read them (he did). And I texted my new friend Annie to ask her if she had the collection, as we’d talked about a couple of the essays when they were first published in the NYT. I wonder if my mom has read them yet? I’ll be sure to ask her.

I’ll end this tribute to the pleasures (and sorrows) of reading (and writing) writing in all its many forms with a quote from the third (and my favorite) essay in the collection, “My periodic table”:

A few weeks ago, in the country, far from the lights of the city, I saw the entire sky “powdered with stars” (in Milton’s words): such a sky, I imagined, could be seen only on high, dry plateaus…. It was this celestial splendor that suddenly made me realize how little time, how little life, I had left. My sense of the heavens’ beauty, of eternity, was inseparably mixed for me with a sense of transience—and death.

I told my friends Kate and Allen, “I would like to see such a sky again when I am dying.”

He died as he lived.

So shall we all.