Gero-Punk Poem: There is a moon

Play and collaboration and spontaneity and complexity and creativity and rebellion are at the heart of the Gero-Punk Project.

At the most recent Gero-Punk Salon we engaged in a communal writing project, a version of what the Surrealist André Breton called the “Exquisite Corpse,” a collaborative creative process that taps into the collective unconscious. In our version of the process, we wrote eight line poems, with each of us writing a line on a sheet of paper and then folding the paper so the next writer could only see the line immediately preceding.  The poems emerged through each writer’s response to the line before, without knowing anything about the shape of the overall piece.  We were all working within the broad themes articulated in the Gero-Punk Manifesto, but each with our own ideas about what those themes might entail.

Over several days I will be publishing the eight Gero-Punk Poems that emerged from our creative play together. 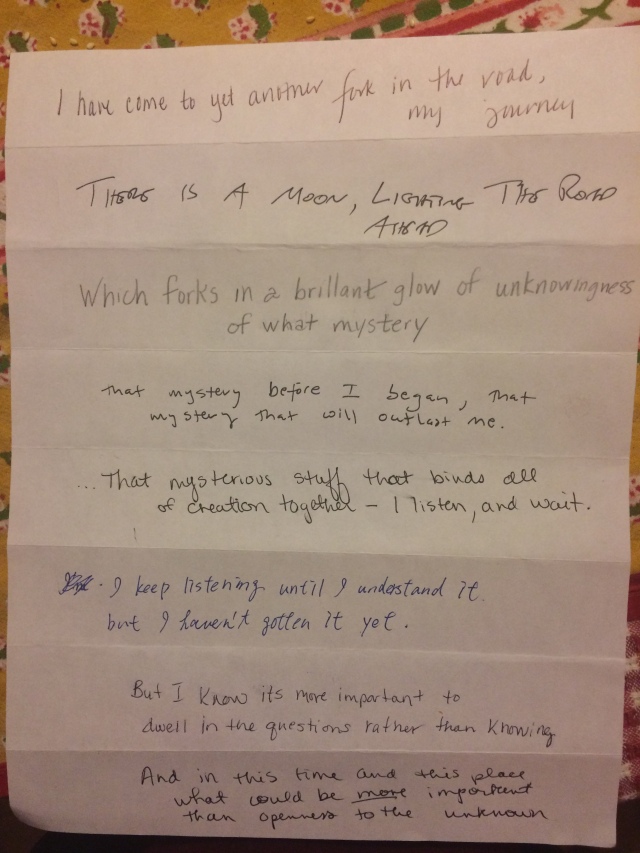 I have come to yet another fork in the road, my journey.

There is a moon, lighting the road ahead

which forks in a brilliant glow of unknowingness of what mystery

…that mysterious stuff that binds all of creation together – I listen, and wait.

I keep listening until I understand it, but I haven’t gotten it yet.

But I know it’s more important to dwell in the questions rather than knowing.

And in this time and this place what could be more important than openness to the unknown.

Become your healthiest you.
Un-Fancy