Some of you know of my dear friend Fred Rigutto, my former across-the-street neighbor and gardening partner.  You’ve probably heard me speak of him and his wonderful garden many times over the past several years. Some of you have read the three part essay, “Fred’s Figs: A Legacy Tale,” that I wrote in his honor after his death in 2010 – perhaps you even saw the little digital story I cobbled together based on the first part of the essay. Though many of you newer readers of this blog have neither seen nor read “Fred’s Figs,” you’ve never heard me talk about my dear friend Fred, you’ve never had the pleasure of catching a little glimpse of him through me. You have little or no context for my periodic mentions of Fred in my Gero-Punk Project essays, such as in the recent piece “Raspberry Legacy.”

So maybe it would be a keen idea if I let you in on what’s what as far as my friend Fred is concerned.

This will be my fourth summer without my friend Fred by my side. I’ve been trying for what feels like forever to write part four or five to follow the first three  parts of “Fred’s Figs: A Legacy Tale” but I haven’t been able to. Writing usually works when I’m trying to process something. Yet all I have been able to manage for the past year or so insofar as my relationship with Fred is concerned are fragmentary utterances, sometimes written down in my journal, most often not. But I have done a hell of a lot of purposeful contemplation on Fred and his legacy. I have forced myself to do so because I needed an escape route out of my enormous anger about the destruction of Fred’s garden, about his adult children’s abdication of carrying forward his legacy, about the rapidity with which they turned on each other after his death.  And I needed a way to manage my grief at the loss of such a true and precious friend. So I turned all of it – the whole heaping pile of  intense emotions – into compost to grown my gero-punk practice.

And in so doing I discovered that there are many ways to leave a legacy.

Tomorrow is an important day in the ongoing story of Fred’s legacy, which is why I’m telling you all of this. Tomorrow a young family from down the street will be moving into the enormous new house that has been constructed on top of what was once Fred’s garden (the enormous new house that blocks my view of the southern sky and sits upon what used to be an entire city lot’s worth of garden).  I’ve been watching the construction of the house since this past January. On the day in February of the Presidential inauguration I watched simultaneously as President Barack Obama was sworn in for a second term as President of the United States and as Fred’s fig tree was ripped out of the ground and torn limb-by-limb by a machine.  I sobbed at the destruction of what was left of Fred’s tender care and hard work; god, he loved that garden! I thought I’d never recover, never adapt, never accept the inevitability of the enormous new house that would soon be erected on top of Fred’s beloved garden.

And truth be told, I was still being a brat about all of this until a few weeks ago when I found out who had bought the new enormous house – sweet folks with three little kids from the neighborhood, neighbors who knew Fred and ate raspberries from his garden. Upon hearing the news I immediately felt a happiness that was genuine, unforced in any way.  Upon hearing the news I decided that if there was going to be a new enormous house across the street from my house, what better outcome could there be than for a wonderful family to dwell in the house that grew in Fred’s garden.

In honor of this auspicious occasion and to mark this new phase of Fred’s legacy, please accept part one of “Fred’s Figs: A Legacy Tale.” 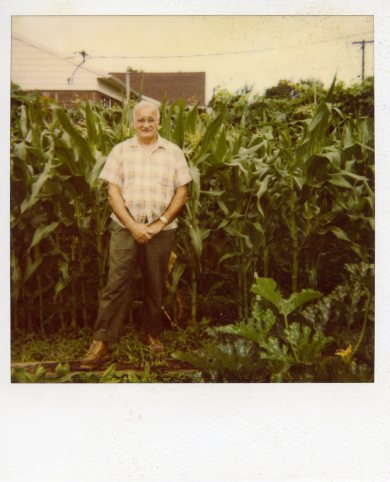 I prepared myself to scramble up the tall, rickety wooden ladder. It’s been leaning against the fig tree since last summer. Fred left it there at the ready in order to gather the figs before the birds could steal them and the bugs could eat them from the inside-out. Fred, my old friend, the angel of our neighborhood, died on January 28th, 2010, after 85 trips around the sun. Now, he’s back in the stars, but this is still his fig tree, still his garden – almost a mini urban farm – and Fred will always dwell here. For the past six summers, Fred has offered me figs from his tree; this summer, the growing season of 2010, I will carry on his sweet fig-giving custom. And I will serve as caretaker of Fred’s garden.

I discovered the first ripe fig of this summer last night because I bopped into it as I was heading into the garden to water. The fig was dangling, bulbous and green, a lovely ornament.  I was caught very much surprised by the ripe fig, as last I’d checked, on the previous Sunday, the figs were seemingly days away – weeks, even – from ripening; the tree was covered with many small, rock-hard dark green tear-shaped drops.

So, last night when I discovered the ripe fig, or, maybe the ripe fig discovered me, I wondered if perhaps there were more – how could there be only one ripe fig?  I decided to ascend Fred’s ladder high into the lush uppermost branches so as to look down upon and from within the tree and survey it for potentially ripe fruits. Lucky me! I found two more!

I also acquired a wholly new view of Fred’s garden: To the lower left, through the layers of lush leaves and branches, the rows and rows of heirloom tomatoes (after Fred died and we were making early preparations for this year’s garden, Joanne, Fred’s daughter, and I found plant tags in the greenhouse. On the tags Fred had written in black marker “a-i-r l-o-o-m” for use in indicating which seedlings were collected from last season’s crop of round, gorgeously purple Russian heirloom tomatoes.).  Glancing diagonally toward the middle of the garden, being careful not to fall off the ladder, I saw the island of raspberry bushes, now finished fruiting; the patch of new potatoes, ready to be excavated with a pitchfork; the ancient apple trees who no longer offer fruit.  Rising up on the near horizon at the garden’s edge, the pole beans, and vines stretching in all directions— small purple buds – future beans! To the right – opportunistic weeds, asparagus stalks gone-amok, misbehaving roses, and colonizing grape vines.

As I perched in the fig tree, so far above the ground below (where there was garlic planted until we pulled it up for curing last week), I had many memories visiting from near and far flash through my mind. I was a major tree climber as a girl, and I closed my eyes momentarily and asked myself this question: What age do I feel right now, tangled in the arms of Fred’s fig tree?

I also had a strong, visceral remembrance of visiting my dear friends Sara and Herb the year before Sara died of quickly-spreading cancer, at the house on the west bank of the Willamette River, just north of the Sellwood Bridge. They’d invited my daughter Isobel and me over to help pick ripe figs. Herb, my elder brilliant colleague, and his wife Sara, a precious comrade, enjoyed only a couple of years at most in that house on the river – they’d just gotten the interior walls tinted the dessert colors Sara saw in her imagination, planted some new plants in the well-established garden, hosted a fantastic Passover Seder for which Isobel and I made homemade kosher chicken soup with two kinds of matzoth balls: the small dense kind that sink, and the large fluffy kind that float!

I’ll never forget that charming, hilarious experience helping them pick figs on a late summer afternoon at their final home as a couple.  Herb on an almost too-short ladder propped against the old, lush fig tree; Sara watching from an upstairs window (we broke the screen as we tried to pry it widely enough for her to lean out and see Herb straining as he reached up to pluck figs), alternating between begging him to be careful and bossing him about where the best figs were and the proper technique for picking them (in response to which Herb sweetly sang songs to Sara promising to be careful, reminding her that he was an old man with many years of ladder-climbing experiences to call upon.).  Izzy and I stood on the deck below the tree with bushel baskets – I attempted to catch the figs as Herb tossed them down to me, and then I handed the figs to Izzy, who placed them in the baskets for safe-keeping, occasionally eating a fig that was too ripe to carry back to our house on our bicycles.

Now as I eat figs too ripe to carry across the street from Fred’s garden to my house, I think about the legacy Fred continues to give me, though our relationship exists in a different dimension now that he’s no longer living. To be trusted with the caring for Fred’s garden, a garden that has grown perpetually for 85 years, tending the plants, cultivating the land, allows me to continue my relationship with him. To spend Sunday afternoons with his adult children pulling weeds and gathering the harvest allows me to expand my relationship with Fred, to learn new things about him, about his people.

I’ve even adopted some of his habits-of-speech. I hear myself asking a friend, “Could you use some figs?”  I take delight in watching my friend break open the green flesh to discover the sweet purple insides of one of Fred’s figs.