I just realized that it’s that time again. Actually, it is well past that time again. But as I always like to sing: Better late than never; no time like the present; sooner rather than later; life is short, act now!

What time is it? It is time for a Gero-Punk public service announcement!

If you live in or near Portland, Oregon, USA (or happen to be passing through), why not join me some Wednesday for lunch?

Here’s where you’ll find me:

And you don’t need to be affiliated with OSU to attend – all are welcome! Bring yourself, a green smoothie or awesome food cart sandwich, and whatever happens to be on your mind.

We can eat and chat and laugh and commiserate and scheme and dream.

I think I may have forgotten to mention that my long-time collaborator – Harry R. Moody – and I have a chapter in Critical Gerontology Comes of Age: Advances in Research and Theory in a New Century, edited by our colleague Chris Wellin, Ph.D. and published last year by Routledge. 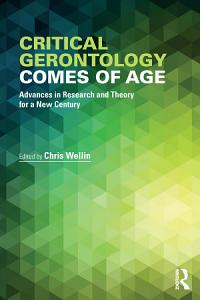 If you are curious about what it means to do Critical Gerontology (C.G.), you might dig reading this collection of essays.  We explore the different areas in which the C.G. perspective has been enacted as we quest to understand the complexities of contemporary aging and construct gerontological knowledge. We authors represent diverse backgrounds, interests, and – so cool – generations, so what results is a kaleidoscopic view of where we’ve been and where we might be heading as gerontologists working in this radical “thought space,” as Stephen Katz, Ph.D. describes C.G.

Speaking of Stephen Katz – a C.G. luminary – he’s written a hot-off-the-presses review of our book for the March issue of The Gerontologist. Check it.

And speaking of my comrade Harry R. Moody, we’ve commenced work on the 10th (!!!!) edition of Aging: Concepts and Controversies, published by Sage. You’ll see the new edition hit the ground sometime later this year, hopefully, with – per usual – updated data and sources, as well as some new juicy supplemental readings and focus areas.

In the meanwhile, if you are a user of our text, whether as a teacher or a student, we’d love to think together with you about what works well and what could work better, not to mention any ideas you have for new things we might want to consider including.

Send your ideas to me at littlecoracle@gmail.com

At the end of the Understanding and Addressing Ageism workshop I facilitated last week, one of the participants asked me if it was wrong that they appreciate being told that they look good for their age.

Yesterday, I had a delightful and illuminating phone conversation with a soon-to-be 76-year-old on the topic of political candidates who are chronologically endowed. They began our conversation by describing the down-shift in energy they themselves have experienced as they’ve grown older, and the necessity and pleasure of taking a daily nap.  They wondered if it is possible to take a daily nap when you are POTUS.

As I was jumping on my mini-trampoline this morning, I was singing a little song of praise to gravity, who is my life-long friend.

And you? What’s on your mind? What’s up-and-down with you?

Thanks for tuning in.